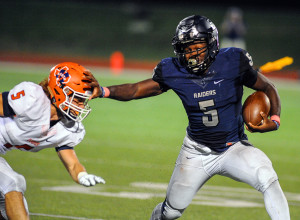 WYLIE — Joe Lepsis said a few weeks ago his Raiders needed to change their approach to football if they wanted to have success in any upcoming games.

That statement came after a 43-20 drubbing by Denton Ryan, after which East entered a two-week stretch of no games and much practice. It was during the latter the Raiders altered their attitude, and once the games resumed, East was ready, something which was apparent last Friday in a 72-43 win over McKinney North in the District 10-5A opener at Wylie Stadium.

The victory improved East’s record to 3-1 overall and 1-0 in 10-5A. Next up is crosstown rival Wylie, which East faces 7:30 p.m. Friday at Wylie Stadium. The Pirates, who are on the upswing, opened district play with a 24-21 win at McKinney.

(To view the complete story, check out the Sept. 30 edition of The Wylie News)