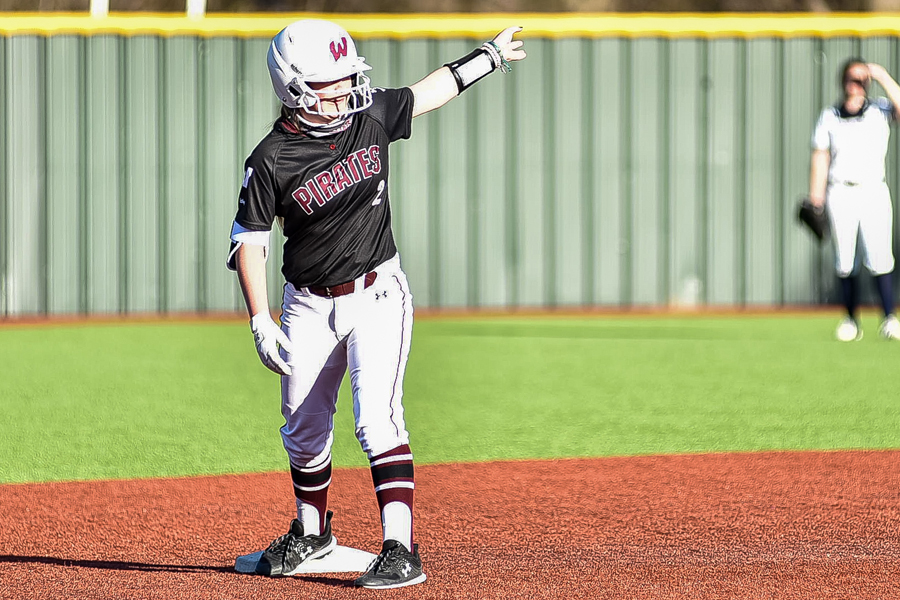 The Wylie Lady Pirates soft­ball team is beginning to find its groove.

Wylie started the season an undefeated 7-0 before drop­ping three of its previous five games, including a 10-1 loss to Sachse to open district play.

But after taking down Rowl­ett in dominant fashion, the Lady Pirates once again came out and took care of business, beating the Lady Patriots of Lakeview Centennial 23-0 on March 19. Wylie was led by 23 runs scored on 17 total hits in the game. Four different Lady Pirates got doubles in the vic­tory, led by Aubrey Brown, Bucket Murphy, Raina Dog­gett and Jordyn Merritt. Sarah Roberge and Averie Gunther also added triples and Mikay­la Hoffman and Murphy each hit a home run to total eight extra-base hits for Wylie in the victory.

Lakeview Centennial also committed five errors in the loss, while Aubrie Gunther was the winning pitcher, mak­ing quick work of her oppo­nents from the circle. In total, the Lady Pirates now sit at 11-4 on the season and 2-1 in early District 9-6A competition. Wy­lie has outscored its opponents 46-11 in its three district games thus far.

After just one game during the week, Wylie will look to regroup with two games this week on the back of a two-game winning streak. After playing at North Garland last Tuesday, March 23, the Lady Pirates will host Naaman For­est this Friday at 6:30 p.m.

Dispatchers may not put out fires or take patients’ tempera­tures or blood pressure, but they do exist in the category of front­line workers who perform a vital role in ensuring first responders do th
View on Facebook
· Share