Vietnam: a view from three angles 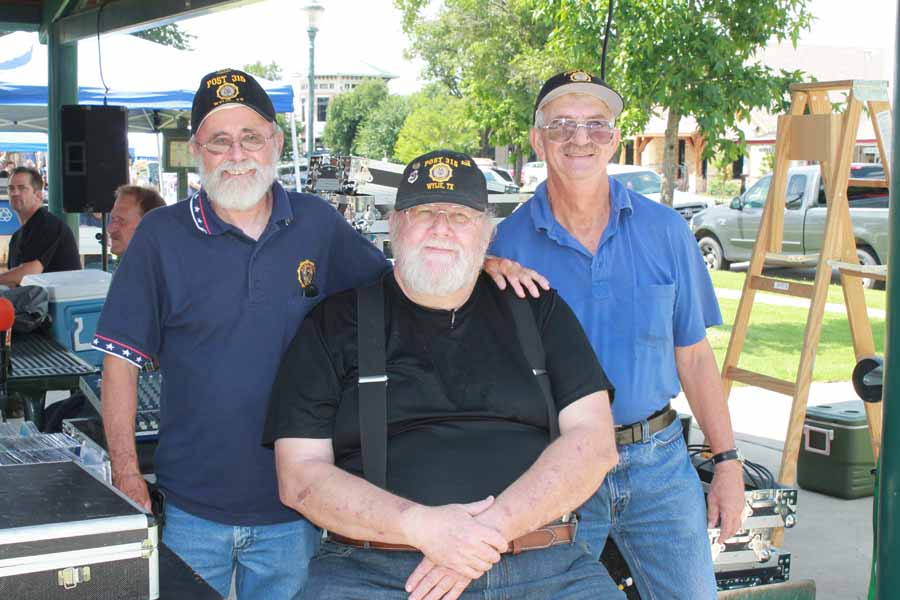 American Legion Post 315 members from left, Don Bridges (Navy), Don Lange (Air Force) and Eugene Close (Army) each served in a different branch of the military in Vietnam. Close was wounded during a North Vietnamese ambush in 1970.

America’s involvement in the Vietnam War lasted for about 20 years, with the official conclusion occurring April 30, 1975 with the fall of Saigon and the end of the US-backed South Vietnamese government.

It was controversial war, to say the least, one that still stirs passions today.

However, one thing is certain; many brave men and women served the United States during its role there, with more than 58,000 of them giving their lives.

It was a little more than 50 years ago that the first of America’s combat troops hit the shores of South Vietnam — the Gulf of Tonkin resolution giving President Lyndon Johnson almost unlimited authority to fight the war had passed less than a year earlier — when 3,500 marines were dispatched to that nation.

Those who served in Vietnam did so in multiple capacities, whether in the field, serving in the rear or at sea.

In Close’s case, he became part of the Army’s 101st Airborne after being drafted in January 1969. A resident of Iowa at the time, Close went through different levels of training before being deployed to Vietnam in January 1970.

Less than four months later, on April 21, Close was wounded in a North Vietnamese ambush, resulting in him spending two months at a hospital in Japan and three more at the Great Lakes Naval Hospital in Illinois.

“I got drafted, and I wasn’t about to leave the country to avoid going over there,” Close said. “Then, I went to all sorts of (army) schools in the US.”

He added, “It wasn’t going over that was bad, it was coming back. When I came back and I found out about the way people thought about all the veterans who went over there, even though they were just doing their duty … It wasn’t my idea to start the war, but it was my place to do what I could while I was there.”

As a soldier, Close spent all but four days in the jungle, where, he said, “conditions weren’t that bad,” as the troops often got resupplied, for the most part, on a regular basis.

“I liked the jungle much better than the rear (area), because in the rear we were getting mortared every once in a while. Out in the jungle, we never got mortared, because they never knew where we were,” Close said.

As for US involvement, Close believes it was the right thing to do.

“Most of the people there wanted us there,” he said. “The problem was politics. They wouldn’t let us win the war. That was the biggest problem.”

One man who served in the “rear” area was Air Force veteran and Wylie resident Don Lange, who was stationed at the Tan Son Nhut airport from June 1969 to June 1970. Although he was never wounded, Lange understood what it was like to be fired upon; the base was the target of mortar and rocket attacks.

“It’s scary, because you don’t know where it’s coming from,” Lange, 67, noted. “All you do is hear it whistle, and you dive and duck.”

Lange joined the Air Force in 1968 while living in Illinois, but did much of his training in San Antonio before being sent to Vietnam.

“We were in Vietnam for one reason and one reason, only — oil,” he said. “When we finished pumping all the oil out of the Gulf of Tonkin, the war was over and we left … That’s my opinion.”

Like other Vietnam vets, Lange also had to endure hostile treatment upon his return home. In one case, he noted, a “peacenik” anti-war individual went a bit too far when harassing a Marine and paid a price.

“When I got back into California, we left the base on a bus, and there was a young Marine who was with me,” Lange said. “When we got to airport … these peaceniks were calling us everything but human beings and throwing stuff at us. One of them got a little too close, invaded his territory, and (the marine) threw a right hook and knocked the sucker clean out. There was a cop standing about 10 yards away and he asked, ‘Did he fall?,’ and (we responded) ‘Yes sir.’” We weren’t treated very well.”

Lange believes Americans regret what Vietnam vets went through once back in the state, and not only have made amends, but are also making sure current combat vets are welcomed back with honor.

“The way they have treated these veterans coming back from Iraq and Afghanistan does my heart proud. I am glad to see they are doing it that way for those guys,” Close said.

Another Legion Post 315 member is 69-year-old Navy veteran Don Bridges, who enlisted in 1964 and saw two tours of duty in the Gulf of Tonkin; 1966-67 and 1967-68. It was there in August 1964 that North Vietnamese gunboats reportedly attacked US Navy ships — that has been disputed and some say disproved — resulting in the resolution Johnson used to conduct the war.

Bridges served aboard the USS Kearsarge, a World War 11-era aircraft carrier that was part of a task force. While his ship was never attacked, Bridges said he could see combat taking place on shore.

“I worked nights and you could see the bombs being dropped; the explosions,” Bridges said. “Generally, we were out there with two other carriers, and we were close enough that you could see their planes taking off … You worked 12 (hours) on and 12 off. You didn’t know what day of the week it was, because it didn’t matter.”

He added, “It was extremely hot. There was no air conditioning except for the officers’ quarters, sick bay and the galley.”

While Bridges and his shipmates didn’t see combat nor were fired upon, that doesn’t mean they weren’t in danger. One of the most hazardous times was being on the flight deck during operations, a place that Bridges, an aviation electrician’s mate, often found himself.

“Your head was constantly on a swivel,” Bridges said. “You never quit looking around. You had turning props, turning rotor blades and jet blasts. I worked nights, so we just never quit … I worried more about our pilots and crews not coming back.”

As for America’s role in Vietnam, Bridges, whose father served in the Navy during World War II, believes it was right to do.

“We were trying to stop Communism there,” he said.

Upon returning to the states, Bridges noted he was luckier than others regarding receiving disgraceful treatment, but added that adjusting to civilian life was still tough.